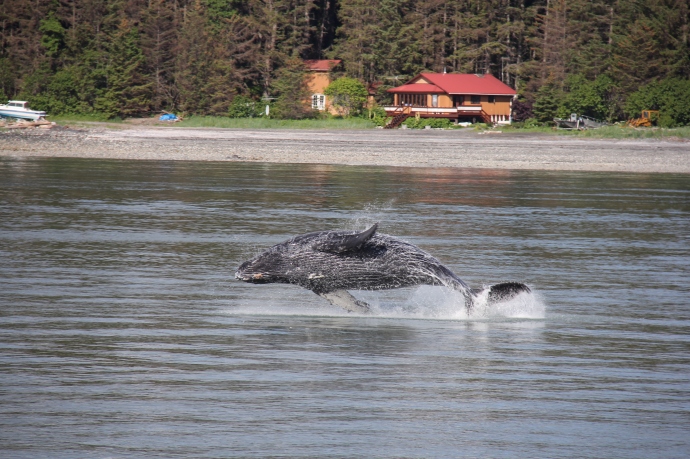 The last part of our Alaska adventure took us to three ports:  Skagway, Juneau and Ketchikan. 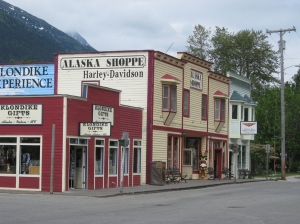 The first port was Skagway, home of the great Klondike Gold Rush of 1898 when thousands of prospectors came to find their fortunes. Many of the buildings here look like they might have back in those Gold Rush days.

It was an overcast and windy day. We just strolled around town, went to the Klondike Museum and had lunch at the Red Onion Saloon. The Red Onion is a bar, restaurant and brothel museum. 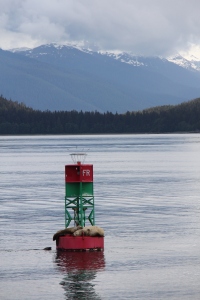 The second port was Juneau, Alaska’s state capitol. We started our day early because we were on a whale watching tour. On the bus going down to Auk Bay where we would catch the boat, we drove by Mendenhall Glacier, one of the few glaciers you can get to by car. But we were there to see whales. And did we ever see whales!

It was a beautiful, clear day and we were so fortunate to see so many whales, including a calf who seemed so happy he breached like 5 or 6 times. We were told that is very rare. What was also rare was seeing a pod of five humpback whales feeding. They usually feed alone. Next to seeing the majesty of Mt. McKinley, seeing the whales was my favorite part of the Alaska vacation.

The third port was Ketchikan, Salmon Capital of the World and home of the world’s largest collection of standing totem poles. 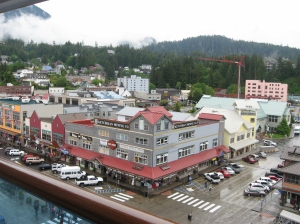 It was a normal rainy, drizzling day in Ketchikan. We walked around town and went to the Visitor’s Center, did some shopping at the Creek Street shops. Then, before heading back to the ship, we had what was supposed to be the best clam chowder in the world. Though it was good, I found it quite peppery. 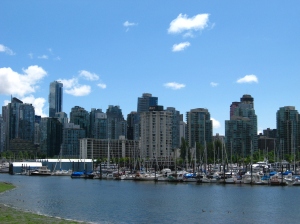 The cruise ended in Vancouver, Canada, where we stayed an extra day. And what a day it was! That was when the Vancouver Canucks lost the NHL Stanley Cup to the Boston Bruins. Riots broke out in the streets! And we were there to witness it. What a way to end our Alaska vacation!