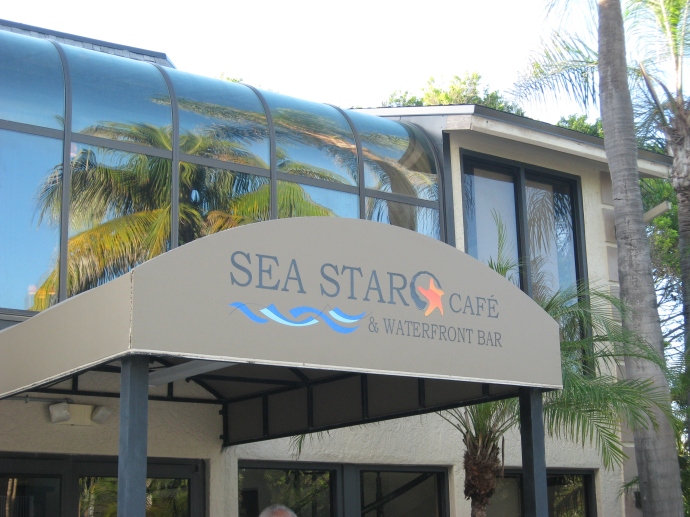 Sometimes it’s nice to not have to get into the car and drive somewhere to have dinner while on vacation. So, on my last trip to Sanibel Island, my first dinner was at the hotel next door to Song of the Sea, where we were staying. The restaurant-Sea Star Café at Song of the Sea’s sister resort, the Sanibel Inn.

We got there a bit early, so there was nobody in the restaurant. But it was Happy Hour and Sea Star Café is known for their Happy Hour. They have $5.00 appetizers and two for one drinks. Well, apparently the wait staff, who were extremely friendly and attentive, didn’t really know what drinks were two for one. Jason, our waiter, said everything was. So, we ordered two Fuzzy Navels and two Pina Coladas. Come to find out, those drinks were not two for one. But they were well made and very

We tried the Boscoe sticks for an appetizer, bread sticks with dipping sauce. Pretty good. For entrees we had the Penne a la Vodka and the Hawaiian Chicken. Both were tasty, not fabulous. And the portions were large.

I have to say that the service is very good, the atmosphere nice, but I wouldn’t rush back there for the food. Had it not been for the great staff, Sea Star Café might have only gotten two paws from Teddy. And if you look at the sign above or visit their website, you’ll see that they call themselves a “waterfront bar.” Well, they’re not really right on the water. Sanibel Inn is on the beach, but the restaurant is not on the water. 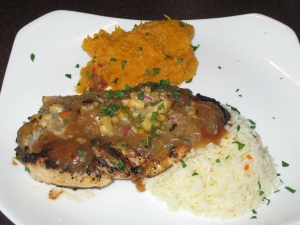 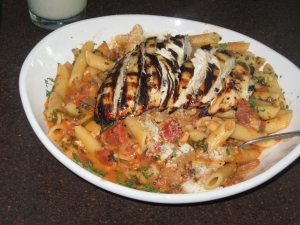